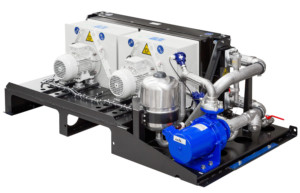 The company Končar Electronics and Informatics (INEM) is currently executing the contract for the serial production of cooling systems for Hitachi. These systems are designed to be installed in train propulsion converter, as part of the Hitachi project in Scotland. The systems are delivered to the converter factory where the Hitachi installs them into the converter and then so completed supplies them further to its train factory. The total contracted quantity is 150 pieces, whose realization is expected by the end of this year.

This serial production is the result of a successfully designed prototype, realized in 2015. It is important to emphasize that the job was gained in the competition of several specialized European companies from this area. The prototype system involved designing the cooling system, FEM analysis of frame, selecting and procuring all components, assembling and testing. After prototype design, representatives of Hitachi attended the testing in INEM, while INEM representatives were in Hitachi for commissioning and functional testing.